Dogs with food aggression may stiffen their body, show teeth, growl, snap, or bite when they are approached by a person or another animal when they are in possession of or near a food-related item such as a rawhide chew, bone, pig’s ear, food bowl, sandwich wrapper, or food that was dropped on the floor. Dogs with food aggression are likely to behave aggressively around items that they consider delicious. For example, most dogs are more likely to behave aggressively over a bowl of canned food or pig’s ear than over a bowl of dry food.

Identification and management of any problem begins with clear definitions. This allow us to share a common language when discussing the problem and making recommendations for intervention and placement.

Most behavior problems are caused by a combination of environmental and genetic factors. Genetic factors may cause a dog to have a tendency to respond to a given circumstance in a certain way (i.e., with aggression, fear, friendliness). Environmental factors may have either a positive or negative impact on a dog’s tendencies. Dogs likely behave aggressively around food-related items because they really enjoy a particular item and don’t want others to have it, because there is a history of conflict (i.e., being punished) related to the item, or because they come from a background where food was a scarce resource and aggression enabled them to get enough food.

Summaries of studies which refer to food and/or possessive aggression can be found in our research library.

Shelter dogs with food aggression are usually identified through an intake questionnaire, observations of behavior while in the shelter, or a behavior evaluation. There is very little peer-reviewed published research regarding the accuracy of identification of food aggression in shelter dogs. When we identify a dog with this problem, it is important to recognize that we are identifying TENDENCIES toward this problem. Stress influences behavior, and may result in the dog’s behavior in the shelter or on the behavioral evaluation not being a true representation of the dog’s behavior in a home. The person surrendering the dog might not be completely truthful on their behavioral intake questionnaire or have accurate information about the dog’s behavior. Identification (or absence of identification) of food aggression, based upon intake information or a behavioral evaluation may not always predict the presence or absence of food aggression in the home.

ID from Intake: People surrendering their dog should complete a behavioral intake questionnaire. This will help staff care for the dog while in the shelter and match the dog to the most appropriate new home.  See the CSD Dog Intake Form [PDF] for an example.

ID from Behavior Evaluation: Food aggression tendencies can be identified during the food bowl and pig’s ear subtests of the Match-Up II Behavior Evaluation. ID from Behavior Observed in the Shelter: Food aggression is less commonly identified during day to day animal care in the shelter. Occasionally, kennel staff might observe a dog behaving aggressively when staff or visitors walk by the kennel while the dog is eating a meal or chewing on a valuable edible chew toy.

Making outcome decisions for dogs with food aggression is a controversial issue for animal shelters. Some shelters euthanize dogs that have been identified with tendencies toward food aggression because of concerns of potential bite risk to adopters. Alternatively, many pet owners do not consider food aggression to be a serious problem; they manage it effectively by avoidance so that it does not cause problems in their home.

Several factors should be taken into consideration before embarking on a training and management program for dogs with behavioral tendencies towards food or possessive aggression. These include:

Goals of Management and Training:

Please make a selection to continue:

The plan for food aggression should be thought of as teaching the dog to SHARE. Dogs are taught to share items, starting with things that the dog has NO interest in guarding, and gradually working up to items that previously were associated with aggressive behavior.

Day 1 only:
On the first day of training, conduct the Toy Preference Assessment [PDF]

Week 2:
This training plan begins during the dog’s second week of the plan, and continues for as long as the dog is in the shelter.

A dog with food aggression must be re-evaluated on a daily basis, by observing its behavior in the shelter and during training sessions, to ensure that its behavioral health is always maintained or improved. It is not necessary to repeat the possessive aggression subtests of the Match-Up II Behavior Evaluation; however, if you choose to repeat the evaluation, it should be done at the end of the first week of the dog’s training and management plan in order to help you to decide whether the dog should be made available for adoption.

Positive Signs: The following factors are indicators that it may be possible for the dog to be successfully managed in a home:

Negative Signs: The following factors should be cause for concern.

The plan and outcome decision for a dog identified with food aggression tendencies will depend upon the resources available within your shelter and community. Because of the potential for food aggression in the new home, if your organization does not have the ability to provide behavior counseling for this problem at the time of adoption as well as post-adoption follow-up, transfer to a group that is qualified and has the capacity to manage the problem should be considered.

Post adoption follow-up for a minimum of three months is important to answer any questions the adopter may have and to ensure that the dog is being successfully managed in the home. This may involve telephone consultations and/or consultations in the shelter.

“Thumbelina, who now goes by Sylvie, is doing great! We've been training her to be the best dog she can be. Sylvie had issues with food aggression before she was adopted, so CSD taught me how to show Sylvie "leave it" and I only give her delicious treats when no one is around to disturb her to avoid any problems. Sylvie is very protective of me, but she "goes to her place" if she feels threatened or uncomfortable. Clicker training, lots of praise and most importantly, consistency, has given Sylvie the opportunity to thrive! Thank you!"

"Brownie is doing fantastic in his new home! House training and obedience training were tough at first, but he learned quickly, and once he learned, it stuck with him. He now comes when his new mom, Zackera, calls his name! At times, he would growl when he was in his Zackera's arms, but following the advice from Kim Melanson, Behavior Counselor at the Center for Shelter Dogs, and putting him on the ground when he started to get protective helped a lot! Brownie also showed signs of food aggression in his previous home and in his Match-Up II Behavior Evaluation, but Zackera has managed this behavior by giving him delicious chews only when he can be alone to enjoy them. By practicing avoidance, there is no risk to people or dogs! Brownie may have had a rough beginning (he had never even seen a dog bed before!) but he is very loved now. He gets to snuggle on a heated car seat, run around in a big yard and play with other little dogs in the park. What a great life he has now! Congratulations to Brownie and kudos to Zackera!" 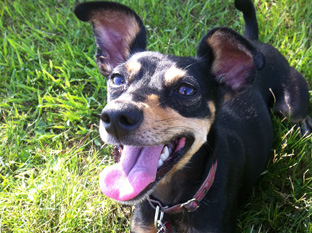 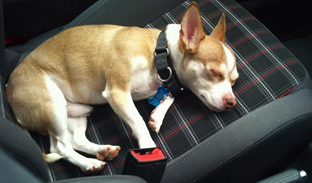