Food aggression in dogs has always been an enigma to me.  In my private practice, I hardly ever saw dogs who were brought to me for food aggression as their primary problem.  In fact, many dogs were brought in by their owners for other problems, and I only later found out that these dogs were aggressive over food when I took detailed behavior histories.   When I first started working with shelters, I then learned that dogs who were food aggressive were regularly being put to sleep.  I knew that food aggression could be associated with other types of aggression, but I also knew that quite often it wasn’t. 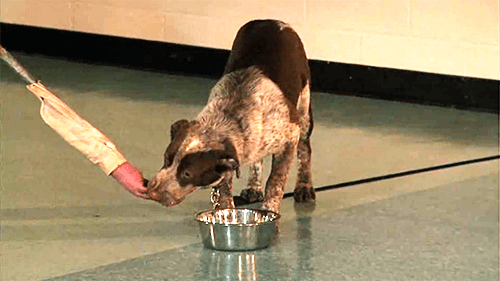 In fact, in a research study I conducted about 20 years ago, I looked at 8 dogs who were food aggressive on their behavioral evaluation in the shelter. After adoption, 4 of them never showed food aggression in their homes. But that was only 8 dogs. Were they different from other dogs? I continued to look at food aggression when I worked for the ASPCA. We followed up on the dogs whom we had evaluated after they were adopted. Out of the 70 dogs we followed, 4 had shown food aggression on their evaluation. After adoption, only 2 of them ever showed aggression over food to their new owners. Again, 50%! But again, it was only 4 dogs. Still, shelters were regularly putting these dogs to sleep. Maybe there was something I didn’t know! But without more research and larger sample sizes, I couldn’t be sure.

When I came to the Animal Rescue League of Boston, we began to treat food aggressive dogs with a simple behavior modification program which involved counterconditioning and desensitization and then placed them in homes where family members (including young children) were able to stay away from the dog while he was eating. When we followed up on these adoptions at 1 week, 1 month, 2 months and 3 months, there were no problems. Even if the dog did show food aggression, the new owners were able to stay safe by avoiding provoking the dog when eating.

A recent survey of shelters done by researchers at the ASPCA found that food aggression was one of the most common reasons for considering a dog unadoptable. Only one-third of the shelters surveyed made any attempt to modify food aggression behaviors and place the dog for adoption. More than half of the shelters surveyed stated that they made no attempt whatsoever to place for adoption any dog who had shown these behaviors.2

So what if the behavior modification program was not done and the dogs were placed only with pre-adoption counseling? Could the adoptions still be safe? How many dogs who showed food aggressive behaviors on their behavioral evaluation in the shelter would still show it in the new adoptive home and, if they did, would the new owners be like my behavior clients and not care or would they be disturbed by it?

Heather Mohan-Gibbons and other researchers from the ASPCA2 conducted a study between 2004 and 2006 in a Wisconsin animal shelter. Ninety-six dogs described as food aggressive on the SAFER behavior evaluation received a behavior modification program and the new adopters received pre-adoption counseling about how to implement a similar program. What Mohan-Gibbons and her colleagues discovered was that the food guarding observed in the shelter did not continue in the home. Within three days, a majority of the adopters reported that they could pick up the bowl while the dog was eating. By the end of three months, the adopters reported no incidents of guarding behavior, with the exception of one occurrence in one dog involving a rawhide.

But the second question that needs to be answered is, what if a behavior modification program was not implemented? What if dogs with food aggression were adopted into new homes only with pre-adoption counseling, which recommended not bothering the dog while he was eating? And if the dog was food aggressive, would the owners care? The Center for Shelter Dogs at the Animal Rescue League of Boston recently conducted a study to answer these questions.3 Using the Match-Up II Shelter Dog Rehoming Program, all dogs entering the Animal Rescue League of Boston were tested for food aggression. Both dogs who showed food aggressive behavior on the behavior evaluation and dogs who did not were followed after adoption by either an online or telephone interview. None of the dogs received a behavior modification program for food aggression while in the shelter and all of the food aggressive dogs all received pre-adoption counseling recommending that the owners avoid bothering the dog while eating. We also easked owners how they felt about their dog, if the dog was food aggressive.

Our conclusion: The detection of food aggressive behavior on a behavior evaluation should be interpreted with caution, since a positive finding on the evaluation does not consistently indicate that the behavior will occur in the home or that the dog is unsuitable for adoption. Each dog should be considered as an individual, and all behavioral and owner-related factors considered when making adoption decisions.

3 Marder, A., Shabelansky, A., Patronek, G., Dowling-Guyer, S., D’Arpino, S. (2013) Food-related aggression in shelter dogs: A comparison of behavior identified by a behavior evaluation in the shelter and owner reports after adoption. Applied Animal Behavior Science 148, 150-156.