When I got the call that let me know I’d be working for the Center for Shelter Dogs at the Animal Rescue League of Boston, I was overjoyed. I decided some time ago that my dream job involved dogs, dogs and more dogs with a little psychology tossed in.

This was my opportunity to work with dogs, do research, and work with and learn from some extremely talented individuals. Little did I know, my experience would quickly become far more than just a stepping stone along my career path.

Working alongside Dr. Sheila D’Arpino and Laney Nee on the behavior team means I get to take part in what we call “special adoptions.” If a dog has a behavior concern – be it fear of people, food aggression, or jumpy/mouthy tendencies – we let potential adopters know that their new family member may not always be a walk in the park…pun intended. For example, a dog in the shelter named Bailey had “moderate to severe” fear of people that caused him to be skittish, shy and even aggressive around people. At times, we were unsure if he would improve his behavior enough to be adoptable through our shelter. However, his time working with the staff, volunteers and the behavior team proved to be extremely beneficial for him. 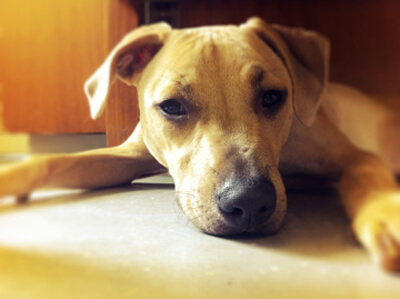 Bailey began warming up to strangers much more quickly, and even began soliciting affection. He even happily greeted me and allowed me to leash him and take him out to playgroup one morning after days of avoiding and ignoring me during training! Throughout his time in the shelter, he remained a sweet, playful boy who was clearly craving love, attention and comfort…and we all wanted that for him. 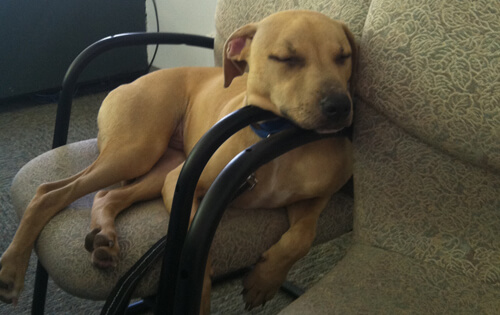 An amazing couple contacted the League after seeing Bailey online and scheduled a meet and greet with Bailey and their deaf dog, Davie. I got to sit in on this experience and, to put it in layman’s terms, it rocked my world. The couple, Davie, Bailey, Laney and I headed out to the play yard to see how Davie and Bailey got along. The couple told us that they had adopted 4 dogs from the League over the years, and recently one of their dogs had passed away. “Davie hasn’t been the same since,” they said, “and we’re hoping a new friend will put the happiness back in his life.” Honestly, it was a match made in heaven. They romped around together, rolling in the dirt and wrestling, then came back to us and flopped down next to each other, panting and grinning like happy pups so often do. It really is a sight to see when two dogs who have never met before are instantly so compatible and comfortable with each other. Not only that, but seeing Bailey interact with his potential parents put a smile on my face and tears in my eyes. After Sheila, Laney and the staff worked for over a month with Bailey, watching him struggle with strangers and even staff, teaching him to be comfortable meeting new people, teaching him the “touch” game (which involves the dog touching our hands with his nose), he was finally able to approach these new people with genuine interest and comfort. Laney and I knew that this was a happy family just waiting to happen. 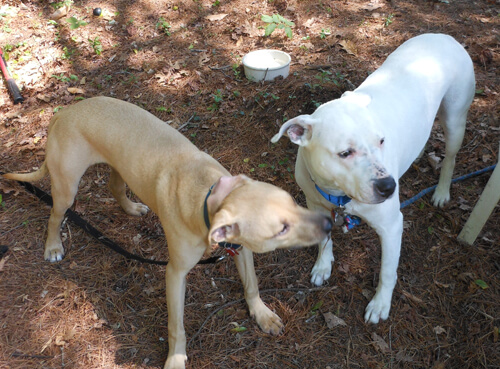 Though we did not want to pressure them, Laney and I continued to sing Bailey’s praises. Whether it was the heartwarming meeting or our convincing speeches, the couple made Bailey a part of their family that night. That day made me feel so spectacularly lucky to be a part of the Center for Shelter Dogs at the Animal Rescue League of Boston. It is truly incredible to see a dog go home in loving, capable hands, especially after struggling day to day in the shelter. It was my first taste of the joy rescue animals can bring, but it most certainly will not be the last!