Sidney is a special boy. He’s so handsome with a tan patch on one side of his face and all white on another, and he’s so full of love and exuberance. I can only imagine how his life started off considering how he was found… in a basement lying in a crate next to a deceased dog and another dog that was near death. Sidney was in the best shape out of the three but had fairly significant injuries as well. We don’t really know exactly what happened to him but can only assume it was certainly not the type of life he deserved. 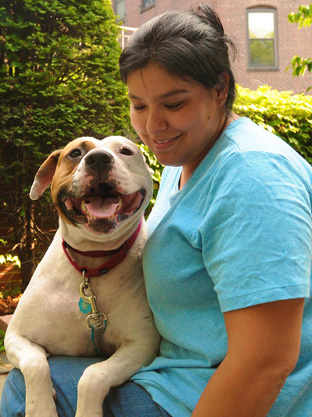 On a cold day in March, Sidney was rescued by the Animal Rescue League of Boston. After recuperating at a veterinary hospital for a few weeks, Sidney spent a few months in NY at the Animal Farm Foundation where he learned some basic behaviors such as sit, down, come and stay. He enjoyed walks on the gorgeous property, swimming and playing lots of games; he also spent time playing with other dogs.

Shortly after his return to ARL, Sidney was showing signs of stress; the behavior team thought it would be a good idea for him to come upstairs for office foster and that’s when he stepped into my life and directly into my heart! Sidney enjoyed spending time chewing his tennis balls or plush squeaky toys or he just snoozed as I worked at my desk. My primary task was to get him used to strangers, mainly men because he seemed to be fearful of them. I followed Dr. Marder’s training plan, and as time went on, he responded well, and began greeting new people with a great deal of confidence; he even seemed to enjoy the attention. After a lot of greetings and a lot of time, Sidney was comfortable and in turn we were comfortable enough to place him up for adoption.

After, several months and a lot of work from several amazing volunteers and staff, Sidney’s perfect match finally walked through the door. Late one Friday afternoon a young, newlywed couple from Cape Cod decided to take the long ride to Boston to meet Sidney. I talked their ears off about Sidney and his ‘quirks’ and about his amazing qualities and when they finally met him they instantly fell in love with him! Three hours later Sidney was leaving the building for his first night EVER in a real home, where he would be loved and adored. It was amazing. It’s been about a month now and Sidney is so happy!! He enjoys snuggling with his family, time outdoors and playing fetch with his tennis ball. I’m so proud to work with the team at the Center for Shelter Dogs because we are able to help dogs like Sidney.