Scruffy was such an appropriate name for this cute, little guy.  He came to us a while ago with his wiry black fur, his bark and his playful but fearful personality.

About a month after he came to us he was adopted, but then quickly returned because along with his playful personality came his voice.  He had a bark that could be heard from very far away.  We quickly learned that this bark was his indication to us that he was scared of something in the environment.  It ended up that he was mostly scared of new people.  The family that had him for a month were having ‘new’ people in and out of their home daily because they were having construction projects completed shortly after they adopted him.  It didn’t seem like it was going to be the right fit for our fearful friend Scruffy. 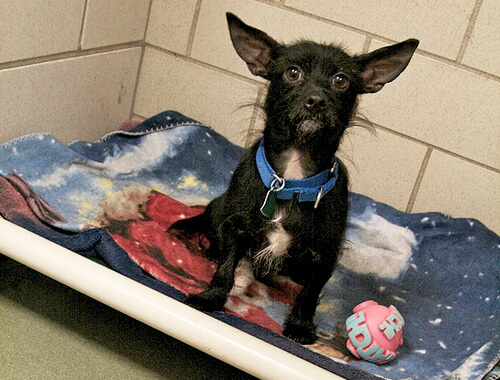 With that, he came back to us and we incorporated a lot of training to help with his fearfulness.  He enjoyed being a part of playgroup, was very food motivated when it came to training, and was extremely playful during play time.  Next step was to help him with the fear he had of new people.

We constantly worked on the name game during our sessions. As soon as we were out of his kennel, I would call his name, and give him a treat the instant he looked at me.  Out on the street; same thing.  I made sure I had higher value treats outside because it was much scarier for him outdoors.  He responded very well to this.  I had him up in my office and he would bark at every person that walked down the hall.  We continued with the name game and anyone who came by would toss him a delicious treat so he would realize there wasn’t a threat.  He caught on to this very quickly.

In March, Scruffy’s forever family entered the door and instantly fell in love with this cute, now friendly little guy.  They were fantastic people who listened intently as we explained Scruffy’s fears and all of the training Scruffy went through since he came here.  They were extremely impressed by the work we’ve put into this cute boy and decided they’d like to bring him home.  They seemed like a great match for a guy like Scruffy because they had a quiet home without young children or too many new visitors.  They were excited about Scruffy and felt they could provide him with a stable home.  I agreed with them so after a few meetings, we sent our special boy home. Immediately the reports from Scruffy’s new family came in and were fantastic.  He had been fitting in really well and even made friends with their cat.

Since Scruffy (now Dewey) was adopted in March, we’ve kept in touch with his family and they’ve come in for a few follow-up appointments with us.  They have continued with training, including the name game, sit, look, coming when called, etc. and have taken Dewey on weekend trips with family where he plays with new people and other dogs and absolutely loves it! 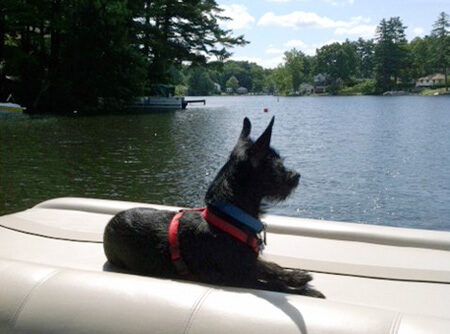 He still gets scared when people approach his owner while he’s on her lap so they continue to diligently work with him on that, but for the most part he has become a huge part of their family and as they told me recently they are so pleased with how he’s fit so well into their lives.