There is no uniformly accepted definition of “puppy mill,” but one that encompasses the central features common to most definitions would be “any breeding facility in which puppies are produced primarily for profit and which keeps so many dogs that the physical and psychological needs of the breeding dogs and puppies are not met sufficiently to provide a reasonably decent quality of life for all of the animals.”

Conditions in puppy mills vary widely in quality, ranging from squalid and extremely detrimental to the animals’ health and well-being to shiny and clean. The breeding dogs in these facilities are routinely housed for their entire reproductive lives in cages or runs, and provided with minimal to no positive human interaction or other forms of environmental enrichment.  The puppy mill environment exposes the breeding dogs and their puppies to two major potential causes of psychological harm: inadequate socialization (to people and objects) and psychological trauma. Both can result in similar psychological and behavioral challenges when the breeding dogs (adopted through rescue groups and shelters) and their puppies (sold through pet stores and over the internet) are taken into human households. No currently written laws at the federal or state level are adequate to protect dogs against the psychological harm that occurs from living in a puppy mill.

It had been observed for decades that after removal from puppy mills many of the former breeding dogs displayed persistent behavioral and psychological abnormalities when compared with the general pet dog population.  We undertook a study to determine if this anecdotal evidence could be scientifically confirmed. Looking at 1,169 former puppy mill breeding dogs that had been adopted into private homes, we obtained comprehensive profiles to compare their psychological and behavioral characteristics with those of typical pet dogs. 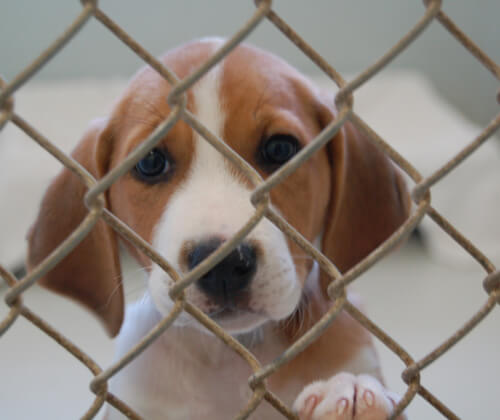 The findings were more dramatic than we had expected. When compared with a large group of pet dogs, former puppy mill breeding dogs were reported as showing significantly higher rates of physical health problems.  With respect to behavior, ex-breeder puppy mill dogs displayed significantly higher rates of fear (to unfamiliar people, to other dogs, and to noises and motions in their surroundings), house-soiling, and staring blankly into space (“dazed,” “zoned out,” “spaced out”), and significantly lower rates of trainability and energy. They also showed about one-half the level of aggression that typical pet dogs do toward unfamiliar people, other dogs, and to their owner. While this might be seen as a good thing, it appears to be due to the overwhelmingly high levels of fear in the dogs, which then suppresses normal aggressive behavior. So it seems to be a good thing, but only because of very bad reasons.

Overall, the results of the study show that dogs kept in puppy mills develop extreme and persistent fears and phobias, altered mental functioning, compulsive behaviors such as circling and pacing, and often show difficulty in coping successfully with normal existence—or, in general terms, extensive and long-lasting psychological scars—this study provides the first scientific evidence that the conditions within puppy mills are injurious to the mental health and welfare of dogs.

We recently completed a similar study on the behavioral and psychological characteristics of dogs purchased as puppies from pet stores and found abnormalities similar, though not identical, to the parent (breeder) dogs who remain back at the puppy mill. This report will be published next year in the Journal of the American Veterinary Medical Association.

We are now engaged in a similar study of dogs rescued from hoarding situations. If you have adopted one of these dogs we would love to hear from you and enter the dog in our study. Participation in the study involves nothing more than filling out an online questionnaire about your dog. The email to reach me at is: dr.frank@bestfriends.org.

Dr. Frank McMillan has been the director of well-being studies at Best Friends Animal Society since October 2007.  The focus of Dr. McMillan’s studies is the mental health and emotional well-being of animals who have endured hardship, adversity, and psychological trauma. He edited and co-authored the text Mental Health and Well-Being in Animals, and co-authored Unlocking the Animal Mind: How Your Pet’s Feelings Hold the Key to His Health and Happiness.