A few months ago the Animal Rescue League of Boston was looking for homes for some Labrador Retrievers that were surrendered to the shelter.  The dogs ranged in age from puppies to seniors, but two chocolate Lab girls especially caught my eye.

They were two years old and their names were Pebbles and Godiva.  The two girls were housed together in the same run and competed with each other to say hello first and give kisses.

About the same time, I received a call from a woman who was referred to me. Her family had recently lost a Labrador Retriever, who had lived with them for 13 years.  This was perfect timing!  Jackie and her family came to the Animal Rescue League of Boston to meet Pebbles.  Godiva had already been adopted.

The Animal Rescue League of Boston’s adoption counselor introduced Pebbles to the family and reviewed the results of her Match-Up II Behavioral Evaluation. The Match-Up II Online Program looks at every dog as an individual.  Just because Pebbles was a Labrador Retriever, it did not necessarily mean that she would behave like the Lab stereotypes that are out there. For instance, that a Lab loves to play ball and “retrieve” or that the dog would behave just like Jackie’s previous Lab that had just passed away.  Although purebred dogs share some identical DNA that dictates the way they look, they have different experiences:  the way they are raised, how they are trained, and the environment they live in. The combination of genes and experience influences every dog’s behavior.  Because Jackie’s previous lab had a different genetic makeup than Pebbles, grew up with different people, had different types of training, and lived in a different house, she was unlikely to act the same way as Pebbles.

That’s where Match-Up II Online was able to help. The summary report revealed that Pebbles scored 7 Triage points on her behavior evaluation which means she had some very minor problem behaviors.  She received some points because she jumped up on people during the assessment.  Her personality scores showed that she was very friendly, somewhat excitable, somewhat playful, mildly fearful, not aggressive and she knew commands.  She was made a regular adoption with recommendations on managing her jumping behavior.

When Jackie’s family met Pebbles, she seemed to be a great fit and they were very excited to take her home.

A few months after Pebbles went home, I followed up with Jackie’s family to see how they were doing.  I asked if the Match-Up II Online results were accurate in predicting Pebble’s personality.  Jackie reported that Pebbles was indeed very friendly, not fearful, moderately excitable, not aggressive, very able to do commands and extremely playful! She also loved to play in the snow! 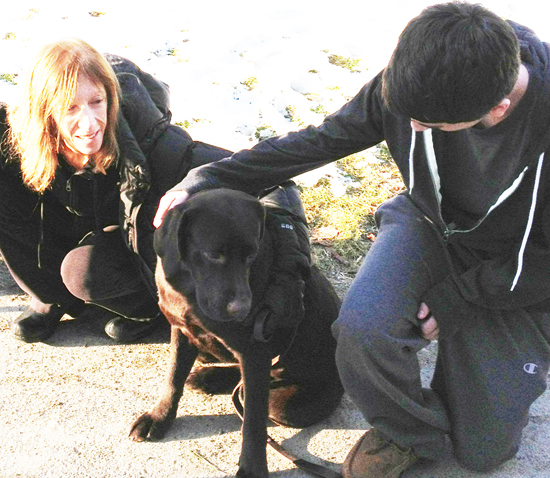 Jackie said, “We have been calling her Pebs, the Pebster, and Pebalicious in addition to other terms of endearment. Taking Pebbles home was the best decision they could have made.”

Once we appreciate and recognize that every dog is different with individual personalities and needs, we will be more able to find the most suitable home for each dog. The concept of individuality applies even more so to mixed breeds.  In most cases, we do not know the breeds that make up the mixed breeds, but often their experiences are either unknown or less than desirable.  The best we can do is to look at every dog in front of us and learn as much as we can about that dog, his or her needs, and their personality…Because Every Dog Is Different!

-Dr. Amy Marder, Director of the Center for Shelter Dogs