We know that when a child looks away and puts his head down, a broken vase is probably nearby. In humans, the behaviors of constricted posture, head down and averted gaze often map to an emotional state called guilt. For humans, this emotion and its corresponding behaviors, actually serve a purpose. As social beings, we need emotions and behaviors that maintain and heal our relationships.

When dog owners come home to a broken lamp, urine on the floor or an eaten pillow, many owners perceive their dogs’ behaviors of lowering body, tail down, moving away, freezing, and lowering head as indicating guilt.

In one 2009 study, Alexandra Horowitz found that the “guilty look” was not associated with whether or not a dog had eaten a forbidden treat and was instead a response to owner scolding.

More recently, my colleagues at the Family Dog Project and I created an experiment to investigate dog presentation of the “guilty look” in another commonly described context: People claim that some dogs look guilty even before owners have discovered the dog’s misdeed. They claim their scolding cannot be the cause of the “guilty look” because they were unaware of the misdeed and therefore they did not scold. 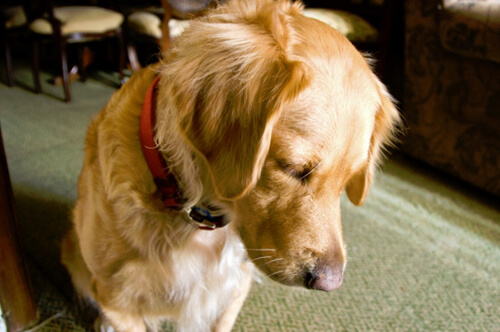 To explore this phenomenon, we set up the following experiment. First, owners enforced a social rule that food placed on a table was for humans and not dogs. Dogs were then left alone with the food where of course, some dogs ate and others did not. Then the owners returned to the room, and we observed how dogs greeted their owners after having eaten or not eaten the food, noting any associated behaviors of guilt.

Here’s what we found:  When it came to the owner anecdote,
there was no difference in dog presentation of the “guilty look” between dogs who disobeyed (ate) in their owners’ absences and dogs who did not. That is to say, our study did not directly support the owner anecdote that dogs display the “guilty look” to a non-scolding owner after having disobeyed an enforced rule.

But can owners pick up on subtle differences in their own dog’s greeting behavior? In our experiment, when simply relying on dog behavior, and not other contextual cues, owners were not able to tell whether their dogs had eaten in their absence.

Julie Hecht, MSc is an Adjunct Professor at Canisius College. She manages Alexandra Horowitz’s Dog Cognition Lab at Barnard College in New York City and teaches and lectures on dog behavior and cognition. She writes for The Bark, Dog Spies and Do You Believe in Dog? Learn more at DogSpies.com.