For most dogs, being relinquished to an animal shelter is a drastic change and a stressful experience. Even though a shelter may make every effort possible to make a dog’s new shelter home welcoming, it is still a place where dogs will be confined, separated from their previous families, and exposed to more noise due to the close proximity of other dogs. These environmental changes are very stressful for most dogs. Because of the influence of individual dog personality on behavior, signs of stress can vary. Some dogs will hide in the back of the kennel, be less active or stop eating. Some may be more active. Some dogs may behave aggressively in response to stress, while other dogs will begin to perform repetitive behaviors, increase their frequency of barking/vocalization, become destructive, and start to urinate and defecate in their kennel. The presence of abnormal behavior and the absence of normal behavior are equally important to note. A dog not eating and not playing may be just as stressed as a dog who is circling, barking, and lunging at the kennel door. 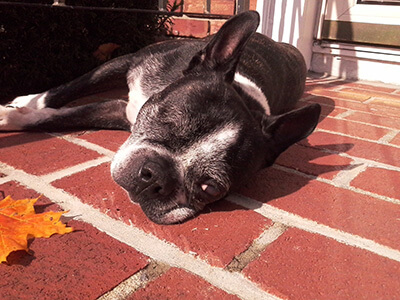 Mickey is a Boston Terrier who came to the Animal Rescue League of Boston in 2012. He was a 7 ½ year old neutered male with a missing eye and right luxating patella. Mickey’s owners had rescued him from another shelter and relinquished him to the ARL due to high prey drive, aggression to small animals (namely their chickens and ducks), and urinating and defecating in the home when left alone. Mickey’s behavior evaluation at the ARL also indicated Jumpy/Mouthy behavior and snapping at other dogs during introductions. He was made available for adoption but didn’t seem to be generating much interest.

As Mickey’s stay in the shelter lengthened, his stress level increased noticeably. After two months in the shelter, Mickey was losing weight and constantly pacing, circling, and whining. In the mornings, kennel staff frequently found urine and feces smeared around the kennel floor, due to Mickey’s pacing. When he interacted with the kennel staff, he jumped up on them and mouthed them, and he did not appear to be able to relax. Mickey’s constant pacing was also aggravating his knee problem and he was limping or holding his leg up more frequently.

We knew that behavioral intervention was crucial, if we were to find a home for this cute little guy. We implemented the following in an attempt to reduce Mickey’s stress level:

Even with the enrichment Mickey was receiving, he continued to be very anxious, so we asked our shelter veterinarian about starting medication to reduce his anxiety It’s important to note that anxiety medication should not be used as a substitute for providing dogs with adequate enrichment. It will reduce anxiety, but unless we are also addressing the cause of the anxiety, it is not be an effective solution to the problem. However, some dogs are so anxious that enrichment is not enough – with these dogs, we consider using behavioral medication. Mickey was started on short- and long-acting anxiety medications. The doses were gradually increased to an effective dose, a dose which reduced his anxious behavior.

We observed Mickey’s behavior both in his kennel and in a quiet space each week to monitor his progress (or lack of) to help us determine if our treatment plan for Mickey was working. For example, was Mickey still pacing in his kennel, if so, was it during the busiest times or all the time, how long was it taking him to settle in quiet space?

One month after beginning medication, Mickey was placed in foster care with one of the League’s volunteers. He continued to relax and adjust in this situation. He lived with a cat which he showed no aggression to, and played regularly with a visiting German Shepherd. We visited Mickey in his foster home to follow-up and ensure that he was doing well. At the time, he was still showing mouthy behavior, although greatly reduced from previously. He was not soiling in the house or exhibiting anxiety when left alone. He accompanied the volunteer to her college classes and lay quietly at her feet while class was being conducted. 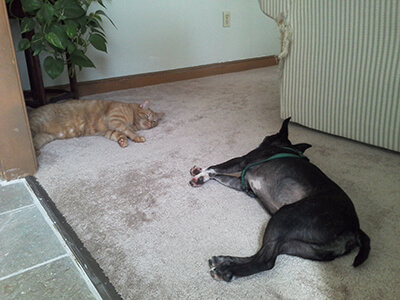 The following month, Mickey was adopted! He had surgery for his knee, is continuing to receive his long-acting anxiety medication, and is doing wonderful in his new home. His new owner indicated that he doesn’t know what he would do without his “wingman”! 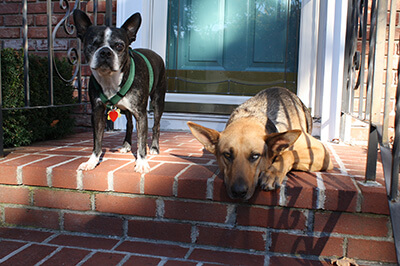 Developing a plan that takes into account as many triggers of stress as possible is important. In Mickey’s case, we considered and added anxiety medication but for many dogs exhibiting stress behaviors will not need medication. A thoughtful plan implemented consistently, as well as a careful review of the dog’s environment and schedule, may be all that is needed to significantly reduce a dog’s stress – and help them find the new home they so deserve!